Every few years, the ancient practice of vaginal steaming gets the celebrity treatment. The glorification began in 2015 when wellness-guru Gwyneth Paltrow extolled the benefits of a “v-steam,” telling Goop.com readers: “You sit on what is essentially a mini-throne, and a combination of infrared and mugwort steam cleanses your uterus.” Three years later, Chrissy Teigen shared a photo of her mid-v-steam on Instagram, quipping: “I don’t know if any of this works but it can’t hurt right? *vagina dissolves*.”

This week, the three hosts of Red Table Talk — Jada Pinkett Smith, Willow Smith and Adrienne Banfield-Norris — took the practice for a spin (or more accurately, a squat). In the episode, which aired Wednesday, all three women can be seen lowering themselves onto a bowl of steam while wearing silk purple dresses. “What sensation are you guys getting sitting here?” Jada asked her daughter and mom. “Definitely a lot of warmth,” Willow replied. “Yeah. This is real queen throne action right here. This is what I love,” Jada added.

The women discuss the need for women to spend more time connecting with their own bodies. “This is lovely,” said Jada. “They say there’s lots of health benefits, but for me, I just feel like spending time with your vagina in a way that, like, just to just show it appreciation and care.” They also touch on how vaginal steaming — which Harvard defines as “when a woman sits over a bowl of steaming herb-infused water” — is technically an “ancient practice that originated in Asia and Africa” and that it “was originally used to cleanse yourself after you finish menstruating.” 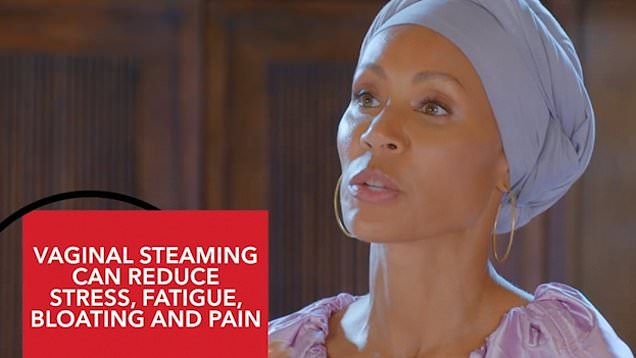 Dr. Sherry Ross, an ob-gyn and author of She-ology: The Definitive Guide to Women’s Intimate Health. Period confirms that the ritual is nothing new. “Mayan women and traditional healers have done vaginal steaming for centuries,” Ross tells Yahoo Life. The original purpose of the vaginal steam, she believes, was a worthy one.

“It’s basically steaming of the vulva, the outer genital area,” says Ross. “It cleans the hair follicles, and opens up the sweat glands just like you’d do on your face.”

Ross argues that we “need to treat the vulva, like the face” because it’s “just as sensitive to dryness and irritation and acne.” In this way, she says, a bowl of warm water with herbs can be useful and calming. “If you keep the conversation limited to the relaxing calming of the tissue, I think that’s a good thing.”

The problems arise when the practice — which she feels could be more accurately deemed “vulva steaming” — becomes aimed at cleaning or treating the actual vagina (which is technically “the tunnel that leads to the cervix and uterus”). As many experts have noted, the vagina is a self-cleaning organ, making things like douches, jade eggs and other vaginal washes not only unnecessary but potentially dangerous.

She says in the same way, vaginal steaming can be risky. “The vagina is inside and we don’t want to disrupt that delicate area because of all the good bacteria that are keeping the environment clean, just like tears in our eyes,” says Ross. “It’s the way that the vagina has its own self-cleaning mechanism — an aggressive steaming could disrupt the pH balance.” Changing the pH of the vagina can lead to issues like yeast or bacterial infections, which can both be tricky to treat. On top of that, using water that is too hot can lead to severe burning.

In a 2018 article from the Journal of Obstetrics and Gynaecology Canada, experts shared the case of a woman who was hospitalized with second-degree burns on her vulva following two days in a row of vaginal steaming.

While Ross sees some benefit to vaginal steaming, other experts like Dr. Jen Gunter, an ob-gyn, New York Times columnist and author of The Vagina Bible see it as the result of a damaging, harmful myth. “It’s one of the core beliefs of the patriarchy. That women are dirty inside,” Gunter wrote in a 2015 take-down of Paltrow’s endorsement. “In Hippocrates’s time they used to think that the womb wandered the body, causing mayhem, and you would coax it back into place by putting fragrant herbs between the legs. This is the same thing. It’s in so many cultures, this belief that the uterus is toxic. I couldn’t believe it was now being presented as female empowerment. It’s bad feminism. And it’s bad science.”

Both Gunter and Ross are adamant that the broader claims regarding vaginal steaming, such as the idea that it can be used to treat endometriosis, bladder infections, fibroids or even improve fertility are unproven and harmful. “That’s absolutely false,” says Ross. “There’s no benefit to that. But external to the vulva to just get a little herbal steam and calm and cleanse the outside? Sure.”

Juneteenth Is a Beyoncé and Solange-Endorsed Holiday